VWell handled, Volkswagen owns up to its mistakes and takes responsibility

Posted on September 22, 2015 by steveoncrisis

Volkswagen has a smelly mess — and that’s not just its diesel exhaust — reporters already christened “Dieselgate.”

Jalopnik reported that Volkswagen and Audi face a maximum fine of $18 billion, including the possibility of pending criminal charges and being subject to Congressional hearings, as well as the company’s market value plummeting almost 20 percent following news of the scandal.

The issue affects almost 500,000 diesels from Volkswagen and Audi in the United States with the 2.0-liter turbodiesel four-cylinder engine. Models were fitted with “a sophisticated software algorithm” that would adjust the emissions during EPA testing, and did not reflect actual normal driving conditions.

In other words, serious fraud.

As also reported by Jalopnik: Speaking just before the unveiling of the 2016 Volkswagen Passat at an event in New York, President and CEO of Volkswagen Group of America Michael Horn made a short statement on Volkswagen’s recent diesel cheating scandal: “Our company was dishonest; we screwed up.” 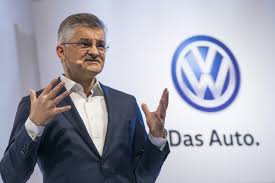 This is an enormous mess and scandal and taking responsibility is not going to ease the financial and legal penalties VW faces. But compared to how many companies and CEOs react — recall GM’s years of stonewalling on the ignition issue — Horn’s approach is refreshing.

Horn said the ongoing Dieselgate scandal was “completely inconsistent with our core values,” and, “We need to make it right with all of you.”

Horn finished his statement with “We will correct this TDI issue. We will straighten this out. We will pay what we have to pay.”

A CEO standing up and being forthright, honest and frank sets Horn and VW apart. It’s the best way to handle a mess like this. What impact it will have on Congress and other authorities is still unknown.

But it’s a very good start.

The content of this blog is about crisis management and mismanagement in a digital age. It originates with Steve Bell, who spent 30 years as a journalist for the Associated Press and in four top editor positions at The Buffalo News. He is now Partner/Director of Public Affairs and Crisis and Reputation Management at Eric Mower + Associates, one of the nation’s largest independent advertising, integrated marketing and public relations agencies, with eight offices in the East. Learn more about EMA at mowerpr.com/crisisready. Steve’s blog is based on his own opinions and does not represent the views or positions of Eric Mower + Associates.

The content is about crisis management and mismanagement in a digital age. It comes from Steve Bell, who spent 30 years as a journalist for the Associated Press and as managing editor and editorial page editor at The Buffalo News. Until recently, he was Senior Vice President and Managing Director of Crisis and Reputation Management at Mower, one of the nation's largest independent advertising, integrated marketing and public relations agency with nine offices in the Northeast and Southeast. He is now managing partner of Steve Bell Communications LLC.
View all posts by steveoncrisis →
This entry was posted in Uncategorized and tagged #emagency, @crisis pr, @moweragency, Crisis management. Bookmark the permalink.